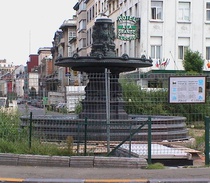 Poelaert designed the vase/plinth while Fraikin was commissioned for the female figure representing the City of Brussels, capped with a model of the Cathedral of Saint Michel-et-Gudule. We were very puzzled by the presence of this fountain since, according to the very authoritative book, "The Monuments and Statues of Brussels" (Pandora), it was demolished by the authorities in 1905. But there it was, in 2001, so we went back with our camera, and it had gone, for renovation. So, 97 years late, but the book was right. But now, summer 2002, it's returning, bit by bit. So far only the vase/plinth, but we await the lady with interest.

This section lists the subjects commemorated on the memorial on this page:
Rouppe at place Rouppe

This section lists the subjects who helped to create/erect the memorial on this page:
Rouppe at place Rouppe

The statue is dated 1864 and was inaugurated 17 December that year together w...