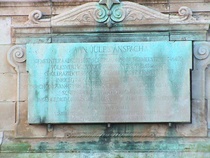 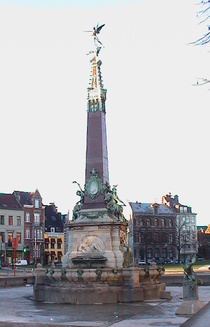 The obelisk is of Scots granite, the figure of St Michael (by Braecke) at top is in gilt bronze. The portrait medal gives a bust of Anspach (by de Vigne). The nude relief (designed by de Vigne, carved by Albert Aerts) represents the River Senne covered over. The two figures at the base of the obelisk representing The City Magistrature and the Grateful City of Brussels are both by Dillens. The gryphons from whose mouths the water spouts are by Braecke. The six Chimeras are by de Vreese; the ornamental sculpture by Houtstont.

The Anspach fountain was designed for and originally erected on Place de Brouckère (inaugurated 22 August 1897), a junction created as part of the project to clean up and cover over the Senne river, one of Anspach’s major achievements. It was taken down in 1973 and re-erected here in 1981.

This section lists the subjects commemorated on the memorial on this page:
Jules Anspach fountain

This section lists the subjects who helped to create/erect the memorial on this page:
Jules Anspach fountain

This section lists the other memorials at the same location as the memorial on this page:
Jules Anspach fountain

This plaque is placed at foot level on the edge of the fountain.

The statue is dated 1864 and was inaugurated 17 December that year together w...