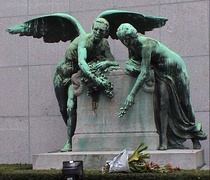 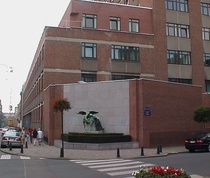 Chosen as the featured memorial, February 2004, because it gives us an opportunity to publicise the launch of LondonRemembers , where the featured memorial is also to Edith Cavell.
The Brussels memorial was inaugurated 15 July 1920 in the presence of Queen Elisabeth of Belgium, government minister P. E. Janson, Paul du Bois (the sculptor) and ambassadors from Britain and the United States. A nearby street name plaque explains that Marie Depage was a nurse in the Belgian army, who perished when the "Lusitania" was torpedoed by the Germans, 8 May 1915. The Edith Cavell hospital is the building behind the monument.
The instruction to tell your children "they killed them" seems not only harsh but also imprecise, but that's what it says.

This section lists the subjects commemorated on the memorial on this page:
Cavell and Depage

This section lists the subjects who helped to create/erect the memorial on this page:
Cavell and Depage

Lawyer and government minister. Son of Paul Janson. Died in the concentrati...

Chosen as the featured memorial, May 03because we now have the list of the de...