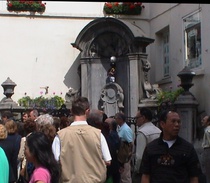 Bronze statuette on a stone façade. It was first recorded in the 15th century. The current statue was made in the 17th century by Duquesnoy. Stolen by the British in 1745 it was recovered only to be threatened by the French in 1747. To make amends Louis XV gave the naked boy his first outfit - a gold brocade coat. In 1817 a French ex-convict took it and smashed it but someone put it back together, and gave the convict hard labour for life. The best thing anyone ever did with it was to cover it with a giant condom on World AIDS Day.

This section lists the subjects commemorated on the memorial on this page:
Manneken-Pis

There are various legends about this little squirt but really nobody knows an...

This section lists the subjects who helped to create/erect the memorial on this page:
Manneken-Pis

The obelisk is of Scots granite, the figure of St Michael (by Braecke) at top...