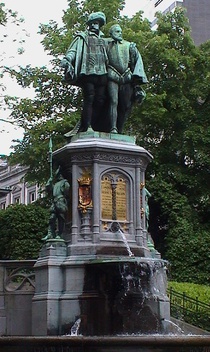 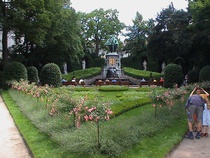 The statue is dated 1864 and was inaugurated 17 December that year together with its ornate plinth and fountain in the Grand Place in front of the Maison du Roi, at the top of the steps, with the figures looking out. In 1872 the derelict Maison du Roi was demolished and rebuilt but the monument did not reappear until 1879 when, at the suggestion of the Petit Sablon’s architect, Beyaert, it was re-erected there, in front of Egmont’s former palace.

There are whole books written on this, the prettiest public garden in Brussels. All we can give here is a very brief summary. The layout of the garden was designed in 1890 by Henri Beyaert, The railings are divided by 48 columns, each topped with a little statue representing one of the 16th century guilds of Brussels. For the purposes of this web site these statues are not "memorials" (phew). Inside the park there is an impressive fountain surmounted by a statue pair, which is surrounded with a semicircle of 10 marble statues, all of which are considered memorials and are listed here, each being allocated a letter (clockwise) indicating their position in the semicircle. They are all distinguished Belgians of the 16th century and the statues were inaugurated on 20 July 1890.

This section lists the subjects commemorated on the memorial on this page:
Le Petit Sablon - Egmont and Hornes

Rebelled against Philip II and was beheaded in the Grand Place, together with...

Rebelled against Philip II and was beheaded in the Grand Place, together with...

This section lists the subjects who helped to create/erect the memorial on this page:
Le Petit Sablon - Egmont and Hornes

This section lists the other memorials at the same location as the memorial on this page:
Le Petit Sablon - Egmont and Hornes

The obelisk is of Scots granite, the figure of St Michael (by Braecke) at top...