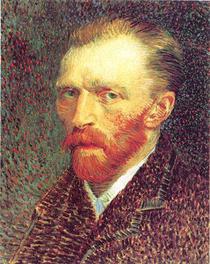 Born in Groot Zundert, The Netherlands, son of a pastor of the Dutch Reformed Church, In October 1880, on deciding to become an artist, and achieving financial support from his brother, Theo, Van Gogh moved to Brussels, where he settled in a small hotel on the Bd. du Midi 72 and was there until April 1881. In 1881 he applied to study at the Ecole des Beaux-Art in Brussels. If he was accepted he was there for only a short period since he was back home with his parents in Holland in the summer. It is known that while in Brussels he studied by himself, became friendly with a Dutch painter there, Anthon Van Rappard, often working in his studio, and, possibly also took lessons from a painter called Madiol.

Committed suicide at Auvers-sur-Oise near Paris by shooting himself in the chest with a revolver. He managed to reach a local inn but died there 2 days later. He is buried in the Auvers cemetery.

This section lists the memorials where the subject on this page is commemorated:
Vincent Van Gogh

President of Art and Culture Belgium-Tunisia