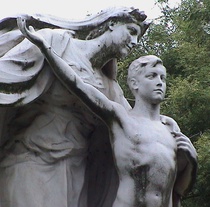 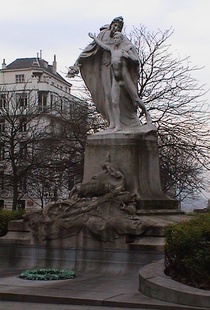 Chosen as the featured memorial, May 03because we now have the list of the dead. On 19 April 1906 Belgium’s first training ship, the De Smet de Nayer, sank off the Bay of Biscay. There were survivors but Captain Fourcault and some of the crew and some of the 30-odd sea-scouts were lost. The ship was only 8 days into its maiden voyage, out of Antwerp. Enquiry revealed that as the ship took on water in high seas the pumps had failed.

The list of names on this monument are too weather damaged to be legible. We found the list of names in the Programme of the inauguration ceremony in the Archives de la Ville de Bruxelles.

This section lists the subjects commemorated on the memorial on this page:
Training ship disaster

This section lists the subjects who helped to create/erect the memorial on this page:
Training ship disaster

Charles de Coster at the Lakes

This delightful monument was chosen as the featured memorial in July 2002 bec...