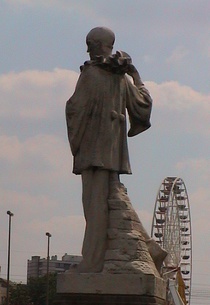 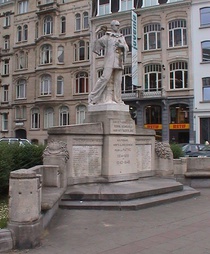 In 1880 it was decided to move the fair from the Grand Place to boulevard du Midi, the section between Porte de Hal and Porte d'Anderlecht. It is now a seasonal fairground with carousels and the like which materialises at Christmas and Easter for a week or two. An appropriate setting for this charming memorial, which was installed on 27 January 1924.

This section lists the subjects commemorated on the memorial on this page:
Fairground workers - WW1 & WW2

This section lists the subjects who helped to create/erect the memorial on this page:
Fairground workers - WW1 & WW2

Rousseau did the central sculpture.

Baron Gevaert at the Royal Conservatory

"Monument expressing British Gratitude to the Belgian Nation". Presented to ...

We spotted the sculptor's signature and date (1921) on the flying coat and on...