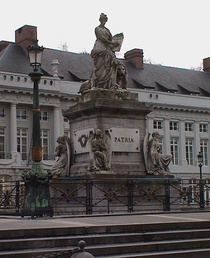 Monument: Martyrs of the 1830 Revolution

This Italian marble monument was inaugurated 24 September 1838, in what used to be place St Michel. The female figure represents Liberty, the lion, Belgium. The angels at the corners of the plinth represent Combat, Victory, Inhumation and Prayer. The reliefs on the four sides of the lower base are entitled: Belgium Crowning Her Heroes, The Dean of Sainte-Gudule Blessing the Tombs of the Patriots, The Patriots’ Oath on the Grand-Place to Vanquish or to Die, Van Hamen Commanding the Assault on the Parc de Bruxelles. Exel was at least partly responsible for these reliefs. Critics of the monument have drawn attention to the similarity between the pose of Liberty and that of Venus de Milo (all but the arms, of course).
In the crypt there are, apparently, 27 black marble plaques inscribed in gold with the names of 467 martyrs, who are supposedly buried behind the plaques but nobody is really sure. One source claims that at the time of the monument's construction some of the people named on the plaques were still walking around so perhaps the lists are of those who participated as well as those who died. The exact number of patriots buried here varies from source to source. There is no public access to the crypt so we could not transcribe the names direct from the memorial itself, as is our normal practice. However, in the Archives de la Ville de Bruxelles we found 447 names in the booklet "Monument des Martyrs" printed by Raes & Labroue, and they are listed under the button "Subjects commemorated" at the left.

This section lists the subjects commemorated on the memorial on this page:
Martyrs of the 1830 Revolution

This section lists the subjects who helped to create/erect the memorial on this page:
Martyrs of the 1830 Revolution

We need a historian to explain what the Belgian army of occupation did.

We have allocated the category "World War 1 Memorial" to all 63 men who died ...