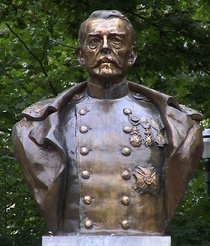 The bas-reliefs represent two events that took place in 1914: the retreat at Antwerp (Anvers) and the battle of Saint-Georges which is near Nieuport where the river Yser meets the sea. Click on external link for some detailed information about the battle of Yser.
The siting of this monument was contentious even before it was erected. There were attempts to have it built at the eastern tip of the Jardin du Roi and when that failed, to have it moved to the garden adjoining the Sainte Croix church (near pl Flagey) which continued even after World War 2. But it remained where we see it today.

This section lists the subjects commemorated on the memorial on this page:
Dossin

Successful in battle at Saint-Georges near Nieuport in WW1.

This section lists the subjects who helped to create/erect the memorial on this page:
Dossin

Apart from the metal framework supporting the saplings this monument is all a...

The sculptor has given his name and the date, in the bronze: Guill. Charlier...

This monument is for the pigeon-fanciers (colombophiles) and, charmingly, als...