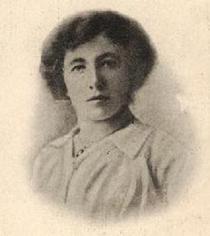 In 1914 she joined the Red Cross and worked in Holland for a time. She then worked in the British information service in occupied Belgium, her job being to identify the German troops stationed near Tournai. She distributed the underground paper La Libre Belgique (Free Belgium) and also helped young volunteers to rejoin the Belgian Army. Arrested 2 February 1916 she was condemned to death 3 March and executed 1 April at the Tir National (national Shooting range).
Text translated from "Le Nouveau Dictionnaires des Belges".
The following text was provided by Jane Davis:
Gabrielle Petit (1893-1916) was, in the manner of Edith Cavell, executed by the German Army in Belgium on suspicion of spying on behalf of the British Government.
Unlike Cavell however, whose guilt is at best uncertain, Petit (a former saleswoman from Tournai) was certainly in the pay of the British, passing on details of German troop movements to the former.
One of only eleven women to be executed by the Germans Petit was shot on 1 April 1916 following imprisonment at St Gilles prison in Brussels. Her death went curiously unnoticed during the war itself however, unlike Cavell’s (which attracted much widespread newspaper coverage and consequent condemnation from as far abroad as the U.S.).
With war over however Petit’s name grew in fame and was thereafter venerated as a brave token of Belgian resistance to brutal German domination of violated Belgian territory.

There is another statue of her, by Paul du Bois, at rue du Monnel, Tournai, where she is again shown with clenched fists.

This section lists the memorials where the subject on this page is commemorated:
Gabrielle Petit

Born at Saint-Amand, France, into an old, rich family. She was devoutly cath...