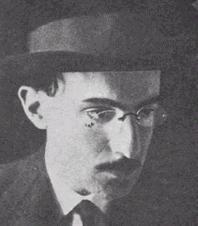 Poet, Portuguese
http://www.kirjasto.sci.fi/pessoa.htm
Born in Lisbon, he spent some of his childhood in South Africa where he learnt English, but lived most of his live in a furnished room in Lisbon and died there in obscurity. Little was published in his lifetime but his posthumous work (found on his death in a trunk in his room) amounts to several hundred pages. He wrote under several literary alter egos.

We can find no hint that Pessoa ever visited Brussels. At the 1991 Europhalia festival Portugal presented an exhibition on Pessoa which included a panel "homage to Fernando Pessoa" by Julio Pomar, originally created for a station in Lisbon. Afterwards this was moved to the Botanique Metro station where it can now be seen.

Born in Lyon. Actor, better known as Jenneval. Composed the words of the Br...

Born Brussels, into a wealthy family, (grandson of General Thys) he lived mos...

Referenced on five memorials in London.