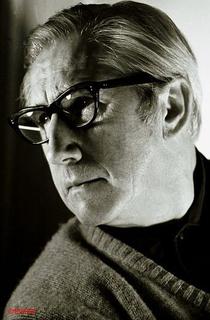 Credit : Jean-Michel Pochet
The son of a policeman. After the war he restyled his name with the Anglo-Saxon "Edgar P. Jacobs". He accompanied Mistinguett at La Monnaie, the Brussels Opera and after winning a prize, became a baritone at the Lille opera. In1940, after 11 years this ended with the war. He then worked as a commercial illustrator and in 1944, was chosen by Hergé as first assistant, and, with others he coloured "Tintin in the Congo". Hergé gave him occasional cameo roles in Tintin’s adventures as "Jacobini". For example: he was mumified in "The Pharaoh’s Cigars". In 1946 he began as an author in his own right, his work appearing on the cover of the first Tintin magazine, with "The Secret Of The Swordfish". This showed a "triphibic" plane, which swam like a fish, sailed like a boat and flew like a plane.
With only 12 albums, he achieved fame. Blake and Mortimer continue having new adventures against Colonel Olrik. In 1981, Gallimard published his memoirs, logically titled "Un opera de papier" ("A work on paper" with a pun on "opera").
His centenary was celebrated with exhibitions at the Centre Belge de la Bande Dessinée that draw attention abroad, a stamp, a medal by Banque Nationale de Belgique and the plaque in rue Ernest Allard.
He died in Lasne.

This section lists the memorials where the subject on this page is commemorated:
Edgar Pierre Jacobs

A non-profit-making organisation who have produced many of the stunning mural...