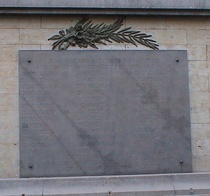 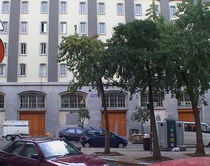 Homage from the local people to those from this area who were martyred by the Nazi barbarism.
{Followed by three columns of name:}
{Below the names, at the right:}
By local public subscription

The building, Mont de Piété, is the state pawnbrokers. It was restored during 2001, and is now back in very active use.

The Jeu de Balle memorial spells this name as "Chongerez".

Here lived Louis Neyts, sorter and postman, died for his country, shot by the...

Built by the great Art Nouveau architect, Victor Horta in 1901, the Innovatio...