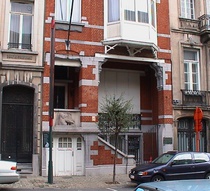 The house is now a museum. There is a modern Ixelles information plaque outside which says "Acquired by the State in 1936 and fitted as a museum three years later, this eclectic-style building constructed at the end of tthe XIXth century was the house in which Constantin Meunier spent the last five years of his life."

This section lists the subjects commemorated on the memorial on this page:
Constantin Meunier's last house

House of the Blind - Garden J