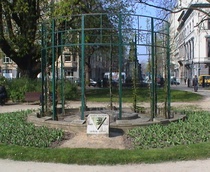 Apart from the metal framework supporting the saplings this monument is all at ground level. The site photograph is taken from the east and shows the "eastern stone" at the front. Just outside the metal framework there is a stone ring on which are given, at regular intervals, the names of the 13 Colonels listed in the Text. On the other side of the ring, opposite the eastern stone is the rather smaller western stone. At the centre there is an inner ring enclosing the centre circle. A very unusual memorial. We hope to find out more about the inscription and the meaning of the Lion’s head on the eastern stone, shown on the photograph of the memorial.

Shortly after having found the memorial we came across a news item in the Bulletin: "Surviving members of the Royal Union of Brothers of the Secret Army (Urfas) met on square Frère-Orban on Sunday 28/4/02 to commemorate those who died fighting with the only Belgian military division active in World War Two. At the request of older members, the union is now going to be reorganised into a fund."

This section lists the subjects commemorated on the memorial on this page:
The Secret Army