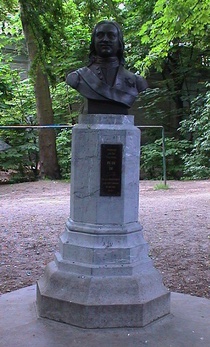 This ravine is the sort of place where "acts of a most scandalous and indecent nature" have been taking place right up to the present day. It seems there used to be a bog or fountain in this ravine, beside which the nearby figure "The Repentant Magdalen" reclined. The bust of Peter the Great was presented by Prince Demidoff in 1854 to commemorate the results of an imperial drinking session. The Latin inscription gives "On the 16th of April 1717, at 3 o’clock in the afternoon, Grand Duke Peter Alekseïevitch, Tsar of Moscow, sat upon the rim of this fountain and graced its waters with the wine of which he had partaken." The bust was erected in 1856. We are indebted to the book "The Monuments and Statues of Brussels" for these details, including the reference to the Latin inscription, of which we, sadly, could find no trace.

1000, Parc de Bruxelles, ravine on south side, in front of palace

This section lists the subjects commemorated on the memorial on this page:
Peter the Great in Parc de Bruxelles

Peter became Tsar at aged 10 when his brother Fedor died. As a young man he ...

We are proud that we spotted this memorial. Due to the overgrowth we learnt...

You can see that between our two photographic visits not only have the season...