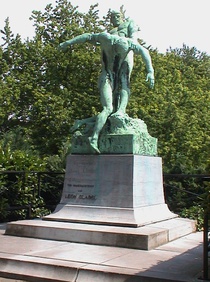 Title: "Le Tombeau des Lutteurs" ("The Fighters’ Tomb") or "Mort D’Ompdrailles" ("The Death of Ompdrailles"). Ompdrailles was a triumphant gladiator who, in his old age, committed suicide. This magnificent sculpture depicts the scene where the Northern Bear, Arribial, his old rival, presents the body for the crowd’s adoration. The sculptor’s name is inscribed on the monument with what looks like "X 92", meaning "October 1892". For a picture from behind see the Leopold II statue in Jardin du Roi. The sculpture was originally tried out at Place Poelaert but it was dwarfed by the Palais de Justice (what wouldn't be?) and was moved to its present location, where it is now dwarfed by the Phénix. Van der Stappen asked Horta to design the base but there were budgetary constraints which meant that the intended red granite was replaced with bluestone, and that Horta's Art Nouveau iron grills were rejected as "hitherto unknown, and somewhat bizarre forms". Jean-Michel Pochet points out that the base is signed "Victor Horta" on the right side, at the bottom.
Inaugurated June 1897.

This section lists the subjects commemorated on the memorial on this page:
Leon Cladel's Ompdrailles

French novelist, born at Montauban (Tarrf-et-Garonne) the son of an artisan. ...

This section lists the subjects who helped to create/erect the memorial on this page:
Leon Cladel's Ompdrailles

This section lists some other interesting Sculptures

The monument, dating from 1926, was placed here due to Woeste’s role in the c...

We would guess this monument represents something like the overcoming of oppr...

Camille Lemonnier at the Cambre

Inaugurated 20 July 1902. Julien invited his brother Gustave to do the surro...