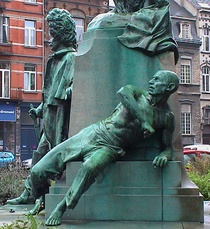 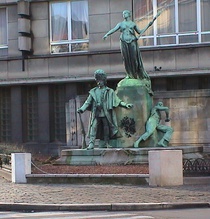 We spotted the sculptor's signature and date (1921) on the flying coat and on the female figure. The lettering in the list of the fallen was so badly damaged that the names were illegible. We contacted the Centre d’Histoire et des traditions de la Gendarmerie hoping that they could produce a list. They did better than that - they had the names renewed so that everyone can now read them. Within the 3 sections the names are listed alphabetically with the exception of the the last 2 lines. This could be because those people died some time after receiving their injuries in WW2 or perhaps they are members of the police force who have died (in line of duty) since. The former seems the more likely explanation, especially since policeman Freddy Breem (site 10 on the ave.de la Couronne map) is not in the list.

This section lists the subjects commemorated on the memorial on this page:
Gendarmerie War Memorial

This section lists the subjects who helped to create/erect the memorial on this page:
Gendarmerie War Memorial