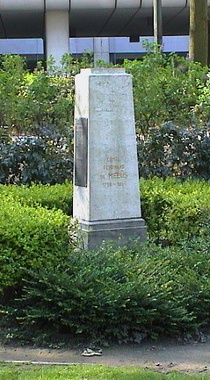 The bust, placed here in 1979, has been stolen from its plinth at least twice. Its current whereabouts is unknown.

2013 Update:  Benoît de Meeûs wrote to tell us that the bust was replaced in 2009. We’ve translated the relevant paragraph: “At the end of May, the bust of Ferdinand de Meeûs was returned to the square which carries his name.  It’s a bronze reproduction of the original marble work lent by the Count’s descendants.  The bust was first installed by the Commune in 1979 but it was stolen twice in the 1980s.  This project was completed thanks to the Commune and with the aid of Brussels Region.  Count Ferdinand de Meeûs (1798-1861) took a leading role in the economic and financial development of the young Belgian state.  In 1838, he founded the “Society for the Enlargement and Embellishment of Belgium”.  This organisation aimed to promote Brussels as a capital, though it originally promoted the Leopold quarter.  {That last sentence was a struggle and we’d be happy to receive better translations.}

This section lists the subjects commemorated on the memorial on this page:
Ferdinand de Meeûs

Following the Belgian revolution of 1830 Meeûs, son of a banker, become the g...

This section lists the subjects who helped to create/erect the memorial on this page:
Ferdinand de Meeûs

This bust, inaugurated in 1991, backs the building which is the headquarters ...

We know nothing about these heads, but would like to.