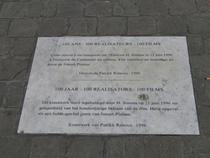 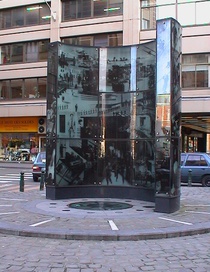 Inaugurated 21 June 1996 to mark cinema’s centenary and to pay homage to Joseph Plateau. A glass half-cylinder (evoking a film spool) displays, on both sides, black and white stills from many movies from around the world. We’ve not checked the suggestion that the stills represent 100 films from 100 directors over 100 years.

This section lists the subjects commemorated on the memorial on this page:
Cinema cylinder

Physics professor at Brussels University, inventor in 1832 of the phénakistis...

This section lists the subjects who helped to create/erect the memorial on this page:
Cinema cylinder

This section lists some other unusual memorials

This memorial’s location, beside the Palais de Justice, is so appropriate as ...

This memorial is in the form of a gravestone.

This plaque is horizontal on the plinth on which the wheel lies.

This temporary memorial has been here, to our knowledge for almost two years ...