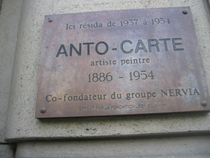 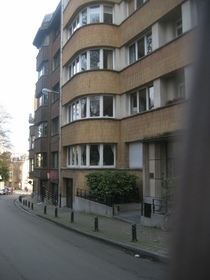 When Anto-Carte arrived in Brussels he had this residential building constructed, incorporating a studio for himself at the top left. In more recent days, a professional plaque had been attached to the façade (as is the practice in Brussels) and then removed leaving unsightly holes and ruining the façade. When the people living there decided to improve its appearance, they were reminded of Anto-Carte by Jean-Michel Pochet who used to live there. The idea of a plaque in Anto-Carte’s memory was unanimously accepted, the Léon Eeckman Foundation agreed to fund it and six years later, in 2003, the plaque was erected.

Pochet particularly remembers that during WW2 the painter made puppets for him and the other children living there.

This section lists the subjects commemorated on the memorial on this page:
Anto-Carte

As rare Walloon expressionists, the Group Nervia was set up in 1928 by Anto-C...

This section lists the subjects who helped to create/erect the memorial on this page:
Anto-Carte

We cannot explain the "OMBR".