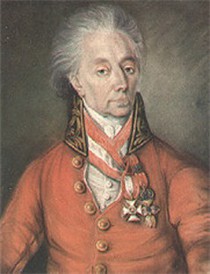 Soldier, published writer, playwright, wit, devoted to excess, described by Goethe as "the most cheerful man in Europe". Born in Brussels, the only son of the impossibly wealthy Hainaut family of landowners. He felt himself to be European, rather than belonging to any particular state and mixed convivially with monarchs across Europe. On the commotion around the death of Louis XV he wrote to Voltaire "it was raining bishops and enemas". A defender of homosexuality he himself led a vigorously heterosexual life from the age of 16 to at least 74 (when he fathered an illegitimate child), seducing women irrespective of rank, or nationality. He was opposed to anti-semitism, and, well in advance of his times, he declared the injustice of a wife's property belonging to her husband. A dull acquaintance, approaching de Ligne yawning was told "my dear Count, you forestall me". There is a biography by Philip Mansel, "Prince of Europe: the Life of Charles Joseph de Ligne" (Weidenfeld).

This section lists the memorials where the subject on this page is commemorated:
Prince Charles Joseph de Ligne

Philippe le Bon Duke of Burgundy, based his court in Brussels in 1456.

Charles Quint, born Ghent, inherited most of Europe by the age of 20. Ruled ...

Daughter of Emperor Charles VI of Austria. Wife of Francis I. Francis was g...