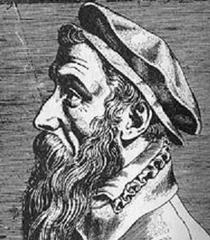 The exact year of his birth is not certain and the spelling of his surname is somewhat flexible.

The following text was copied from: external link
Flemish artist active in Antwerp and Brussels, famous for his paintings and drawings of landscapes and peasant life. Brueghel rejected the influences of Italian Renaissance art and its classical foundations. Rather than depicting mythological subjects and idealized scenes, Brueghel's art portrays natural figures acting out realistic situations in contemporary settings.

Born Pieter Brueghel in the town of Breda, located in northern Brabant in present-day Holland, he later dropped the "h" from his name. His two sons, Pieter the Younger and Jan, both became well-known painters and retained the "h" in their names.

A statue of Brueghel (by Adolphe Wansart) was planned for the 1935 Universal Exhibition at Heysel. There is a photograph showing a full size model in place. It shows Brueghel with a bagpipe player, representing the people. After the exhibition it was planned to place the statue permanently in the place de la Chapelle (outside the church where he is buried). It has not yet arrived.

This section lists the memorials where the subject on this page is commemorated:
Pieter Brueghel

This plaque is badly degraded but there seems to be an artist's palette above...