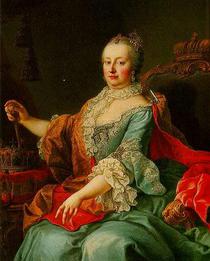 Daughter of Emperor Charles VI of Austria. Wife of Francis I.
Francis was given the throne of the Austrian Netherlands (approximately what would become Belgium) in 1748, at the Treaty of Aix-la-Chapelle, but Maria Theresa was the real ruler. She and her Governor, Charles of Lorraine (see index) oversaw significant improvements to roads, waterways, agricultural and industrial practices. She was succeeded by her son Joseph II in 1780.

This section lists the memorials where the subject on this page is commemorated:
Maria Theresa

Born Brussels. Died at Marche-les-Dames in a mountain-climbing accident. He w...