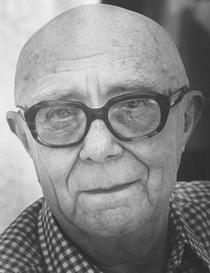 Born Jean Émile Louis Scutenaire, this lawyer wrote under the name Louis, chosen in 1945 to separate his surrealist activities from his work in a government department. ("In my village, the rich were named Jean, the poor Louis"). He was known by his friends as Scut, while his wife, poet and journalist Irène Hamoir, was known as Irine.
"Mes Inscriptions" his first book in 1945, contained sentences (like the one on the plaque), aphorisms and short stories - "thoughts that everyone has, but does not write". Published by Gallimard, he wrote a second "Mes Inscriptions" but, asked to cut four phrases, he refused and the book was delayed for 13 years until it could be published in Brussels. He died at the house in rue de la Luzerne, on the ground floor to which his illness had confined him, on precisely the same day and hour, 20 years later than his friend René Magritte. He was watching on television the repeat of a film made to commemorate Magritte’s death. His last words were "Irine, you know, everything by Magritte is definitely good. . . ". She strongly disagreed but received no answer.
Scutenaire is credited with the titles for more than 170 of Magrittes’s paintings. This naming exercise happened every Sunday afternoon at the Magritte’s home in Jette, with friends Colinet, Mariën, and the Piqueray brothers.
Scutenaire was awarded Le Grand Prix de l’Humour Noir.

"Existentialism drags itself painfully towards the river "Knowledge" which Surrealism leapt across more than twenty years after Dada had caused it to dry up."

This section lists the memorials where the subject on this page is commemorated:
Louis Scutenaire