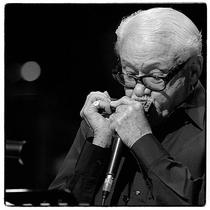 Aged 3 Toots learned the accordion, then guitar, and then in the 30s, the harmonica, inspired by Larry Adler in the movies. After a lung illness he returned to the guitar. He travelled with Benny Goodman and was named Toots after Toots Mondello and Toots Camerata. In 1952 he moved to the USA and played with Duke Ellington, Miles Davis, Stan Getz, Dizzy Gillespie, Ella Fitzgerald, Quincy Jones... and Charlie Parker. Since then he has played and composed on the harmonica some very well-known pieces, e.g. Bluesette in 1962, and Midnight Cowboy. He is an honorary doctor at the Free University of Brussels, and was made Baron by King Albert II. He now lives half his time just outside Brussels and half in New York. Still active, he toured Japan in 2004.

This section lists the memorials where the subject on this page is commemorated:
Jean-Baptiste Thielemans, "Toots"