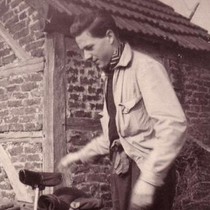 Due to the Occupation by the Nazis The Free University of Brussels ended classes in November 1941. Instead teaching was carried out in secret at various other places of education. Fraiteur attended these classes and also, as a member of the Partisans’ Army, participated in a number of dangerous resistance activities, the last of which took place on 15 April 1943. He killed the journalist and art critic, Paul Colin, who was collaborating with the Germans. Arrested two weeks later, he was hung at Breendonck, 10 May 1943.

This section lists the memorials where the subject on this page is commemorated:
Arnaud Fraiteur

We have a soft spot for this plaque. It was the first we saw in Brussels and...

Jean-Michel Pochet tells us that Jean-Jacques Michel ran a garage and lived i...