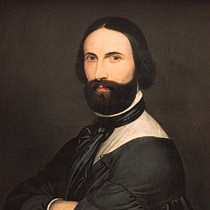 Born Dinant. Whether true or not, Wiertz appears to have been convinced of his own genius and good at convincing others. He won the Prix de Rome (1832). The Wiertz Museum (rue Vautier, 62, Ixelles) was created by the State during his own lifetime. It was designed by him as a temple dedicated to his glory. He died there, in his own museum. His remains were embalmed in accordance with ancient Egyptian burial rites and we were told there is a Wiertz vault in the Ixelles cemetery but the Find a Grave web site shows a very modest grave.

This section lists the memorials where the subject on this page is commemorated:
Antoine-Joseph Wiertz

Inaugurated 2 October 1881. The broken column symbolises the death of Wiertz...

As rare Walloon expressionists, the Group Nervia was set up in 1928 by Anto-C...

The exact year of his birth is not certain and the spelling of his surname is...