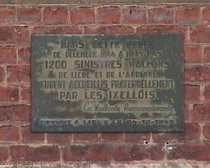 In this school from December 1944 to March 1945 1,200 Walloon disaster victims from Liege and from the Ardennes were accommodated here as brothers by the people of Ixelles.
Gratitude from Walloon
Given to Liege 24 December 1945

In 1944 Ixelles sheltered 1,200 children from Liége which was under attack from V1 bombs. In memory of this, this street (ex-l'Orge) was dedicated to Liége, and a street in Liége was named rue des Ixellois.

House of the Blind - Garden W

Battle of the Marolles

The Marolle (part of the Marolles), a working-class area of Brussels, already...

The French painter Louis David died in this house, 29 December 1825.

Due to the fact that the plaque is placed right at the corner of two streets,...