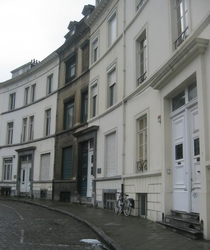 Hugo often stayed here, while also going to Holland, Germany and Luxembourg. He was here with his family June - October 1866. Charles, Hugo’s son, was married here in 1865, 3 children were born, one died. It was here that Hugo started L’Homme Qui Rit which he finished in 1868, aged 66, - 4 volumes published in Brussels in 1869 by Lacroix and Verboeckhoven. This man’s permanent laugh is terrifying, created as it is by the Comprachicos bandits cutting his mouth to enlarge it. In the preface Hugo wrote: “From England, everything is great, even what is not good, even oligarchy”.
Victor Hugo’s wife died here but he could accompany her corpse only as far as the French border.
When Napoleon III was defeated, in May 1871, while Hugo was living here the house was attacked in retaliation for political activities on his part. He was expelled from Belgium shortly after and returned to France.

This plaque is relatively recent (since about 2003). It appeared at about the same time that a Frenchman opened a gallery here called "L'homme qui rit". That has now closed but the plaque remains.

This section lists the subjects commemorated on the memorial on this page:
Victor Hugo at Place des Barricades

French, born in Besançon. Examples of work: Les Misérables, Hunchback of No...

Many buildings in Brussels have the architect’s name inscribed on some stone ...

House of the Blind - External A3