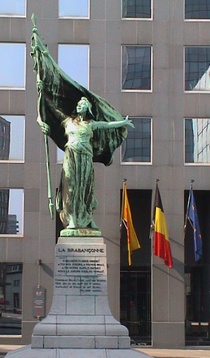 The statue was originally positioned in the Grand Place as one of a number that were scattered around Brussels on a temporary basis to celebrate the 1918 Armistice. After some time in storage it was brought out to take up its present permanent position to mark the Centenary of Belgium Independence, this second inauguration being on 16 November 1930.

This section lists the subjects commemorated on the memorial on this page:
The Brabançonne

This section lists the subjects who helped to create/erect the memorial on this page:
The Brabançonne

Inaugurated in September 1897. Merode is buried in the Martyr’s crypt under t...