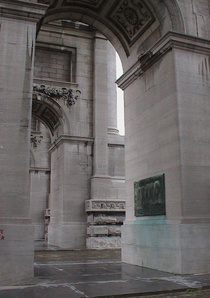 Plaque: The Belgian Dynasty and the Congo

Chosen as a featured memorial in August 2002 because the presentation of Belgium's relationship with its ex-colony is a current topic.

The relief on this plaque depicts Belgium’s first five kings: Leopold I, Leopold II, Albert I, Leopold III, Baudouin I. The date given, 1931, is the centenary of the Belgian dynasty (Leopold I was crowned in 1831) but the plaque could not have been put up until 1951 at the earliest, when Baudouin started his reign. These museums are amongst the many splendours that Leopold II created from the riches that he acquired from the Congo. Whether the Congo feels as grateful to the Belgian Dynasty as they feel towards it, is another question.

This plaque, paying lip service to the contribution of the Congo, illustrates a previous view on Belgium's colonial past. Recently it has been recognised that the exhibitions at the Tervuren Museum are still presented as they were before colonialism was questioned, and it has been decided that that is not acceptable today. Before the end of 2002 the museum will have changed. Some mourn the loss of this historical perspective. We hope that something of the old presentation will be kept as a record of how things used to be and as a point of comparison with how things have changed. To see other related memorials use the Search facility and search on "pioneers" and on "Congo". The Congo Monument in Parc Cinquantenaire is particularly evocative of its times.

Site: The Belgian Dynasty and the Congo (1 memorial)

1000, Park Cinquantenaire, under the arch between the two museum wings.

This section lists the subjects commemorated on the memorial on this page:
The Belgian Dynasty and the Congo

Leopold II's real purpose behind his acquisition of the Congo became clear as...

House of the Blind - External Row I

Hospice at rue d’Accolay - I2