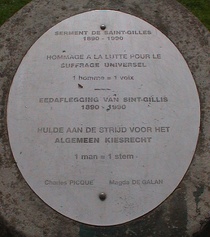 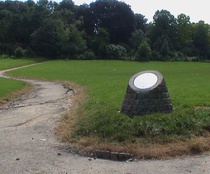 We think that to describe one half of the adult population as "the universe" is somewhat inexact. But accepting that common definition, universal suffrage was achieved in Belgium in 1918 with the other half achieving partial suffrage 1 year later and full suffrage in 1948 (1918 for the UK and 1920 for the USA). It is possible that the date of 1890 given on this memorial refers to suffrage in local elections (the 50% universe, of course). We imagine that the two named politicians were present at the inauguration ceremony.

This section lists the subjects commemorated on the memorial on this page:
Suffrage

Born St Gilles. First a local Forest politician then a Member of Parliament,...

Hospice at rue d’Accolay - I3

As can be seen from the photograph the medallion and plaque were missing when...

Rebuilding of the Grand Place

House of the Blind - Garden M