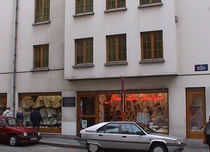 Chosen as our featured memorial in July 2004. The decadent relationship lived by this outrageous pair has left a trail of plaques across London and Brussels. Start your virtual journey in their footsteps right here.

Verlaine and Rimbaud had a homosexual relationship which was sado-masochistic and volatile. You can trace their earlier relationship in London on LondonRemembers. Following an argument in London Verlaine left Rimbaud there and came to Brussels. He then persuaded Rimbaud to join him but obviously the relationship had not improved. After an absinthe session Verlaine shot Rimbaud twice, hitting him in the wrist and was sent to prison for 2 years for attempted murder. Jean-Michel Pochet tells us that the gun was bought at 9:00 am from 11, Galerie St.Hubert and that the shooting took place on 10 July at about 14:30.

This section lists the subjects commemorated on the memorial on this page:
Rimbaud and Verlaine

This is certainly, physically, a plaque but we are not sure that its purpose ...

The plaque was inaugurated on 27th April 2005 to commemorate the tenth annive...

Rebuilding of the Grand Place