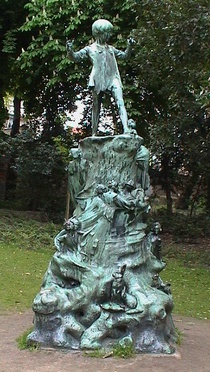 Not quite a memorial, agreed, but we, as Londoners, couldn't leave it out. It looks just as charming here as in Kensington Gardens. Sir James Barrie’s play, "Peter Pan", was first produced on 27 December 1904 and became an instant success. The first Peter Pan, Nina Boucicault, (always a woman) modelled for the statue in 1911. Barrie personally commissioned the sculpture and arranged for its erection in Kensington Gardens. Frampton’s memorial in St Paul’s, London, has a figure holding a model of this statue.

This section lists the subjects commemorated on the memorial on this page:
Peter Pan at Jardins d’Egmont

This section lists the subjects who helped to create/erect the memorial on this page:
Peter Pan at Jardins d’Egmont

The sculptor has carved his name and the date of 1910 on the statue. The two...

The statue was originally positioned in the Grand Place as one of a number th...