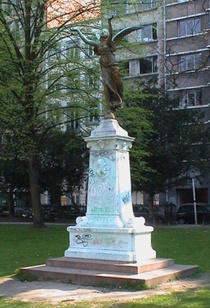 Entitled "Winged Spirit", inaugurated here 19 July 1909. This started life as an ivory statuette by Dillens (one third the size), entitled "Fame", commissioned by the City as a retirement present for the architect Victor Jamaer, who had restored the City Hall and the Maison du Roi on the Grand Place. In the statuette miniatures of these buildings are being proffered upwards but their inclusion was not appropriate for the memorial to Dillens. Lagae did the sculptural work, including the portrait medallion of Dillens, and Gustave Dillens (Julien’s brother) worked on the decorative elements.
This must be one of the few instances of a commemorated person being credited with the creation of his own monument. Certainly the first on this site.

This section lists the subjects commemorated on the memorial on this page:
Julien Dillens at square de Meeûs

This section lists the subjects who helped to create/erect the memorial on this page:
Julien Dillens at square de Meeûs

This section lists some other interesting Sculptures

Albert I at place de l'Albertine

This statue, inaugurated in 1951, also exists at Ostend. The memorial to Alb...

The plinth of the sculpture is placed in the middle of a stone which has the ...

Installed in 1901. Pollution-damaged, the statue was replaced with a copy on...