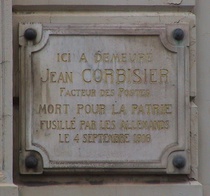 Chosen as a featured memorial in August 2002 because it is representative of the many personal and touching memorials in Brussels, bearing witness to the horrors of wartime occupation and the bravery of those who resisted. Coming from a country that was not occupied we find these memorials particularly moving. Follow the "Subjects Commemorated" button at the left and you will see that Corbisier appears on three memorials, one of which is a list of those who were held at St Gilles Prison and were eventually shot by the Germans. Look up number 5 on this Barrière map and you will see another very similar plaque to another postman, Louis Neyts, shot on the same day. Presumably both plaques were put up by the Post Office. One wonders if they worked together in the Post Office, joined the resistance and worked together there and were, for that reason, shot together.

This section lists the subjects commemorated on the memorial on this page:
Jean Corbisier

House of the Blind - Garden T

We wish we could explain this to you but we can’t. There are some additional...