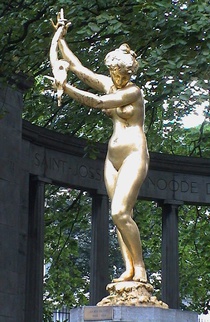 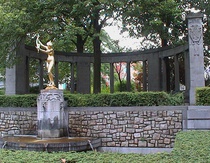 DeRaed (the fountain and plinth) and Dillens (the sculpture "La Source") each has a small brass plaque attached to their work giving their dates. The statue was cast in 1932. The original smaller version was commissioned by the Société Intercomunale des Eaux to be presented to its founder, Armand Steurs, on 1 January 1899, when the first water from the River Bocq arrived in St Josse.

In 1930 there was a nationwide project to celebrate the nation's centenary with each commune planting a tree. Many of these trees were not "labelled" as such and are now effectively lost. We have read that the St Josse centenary tree is in this garden, but do not know which one. This garden was inaugurated 3 July 1932.

1210, square Armand Steurs, in the southwest corner of the garden

This section lists the subjects commemorated on the memorial on this page:
Inter communal water supply

The Bocq is a small river in the Ardennes, flowing into the Meuse, with its s...

This section lists the subjects who helped to create/erect the memorial on this page:
Inter communal water supply