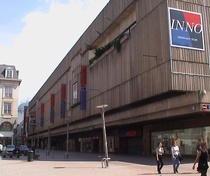 Built by the great Art Nouveau architect, Victor Horta in 1901, the Innovation department store was destroyed by a fire in 1967 in which 325 people were killed in less than half an hour. Arson was suspected but no culprit was ever traced, nor responsibility claimed. A recently published book ("L’Incendie de l’Innovation", Luc Pire) suggests that the fire was started by Chinese Maoists, partly based on the anti-US climate at the time and the American promotion that the store was running. The tragedy led to new safety regulations and a new architecture for public buildings. It is said that it was to wipe out the memory of this disaster that the company remarketed itself as "Inno".

1000, rue Neuve, Inno department store, the entrance opposite no. 82

This section lists the subjects commemorated on the memorial on this page:
Inno fire