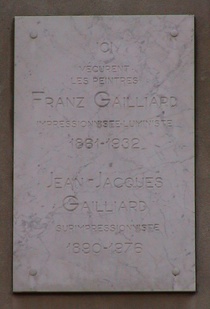 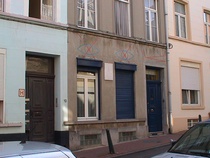 The text on the plaque has been adjusted. It looks as if the painters were originally described, respectively, as "IMPRESSIONNISTE-LUMINISTE", and "SURIMPRESSIONNISTE" but the "IMPRESSIONNISTE" has been changed in each case to "IMPRESSIONSSEE", which is not our dictionary and we don't understand. However, artists, understandably, often object to the labels we stick on them and perhaps the Gailliards had created a word that they felt described their art. We would guess that the street was named after the artists but it's possible that they took the name of the street (see Jacques Feyder). While taking the photographs we were told that a painter lives at the house. It is certainly unusually adorned.

This section lists the subjects commemorated on the memorial on this page:
Gailliard painters

Born Brussels. Son of Franz Gailliard. Not to be confused with Jean-Jacque...

This plaque is, unusually, on a post, outside number 82, but we read somethin...