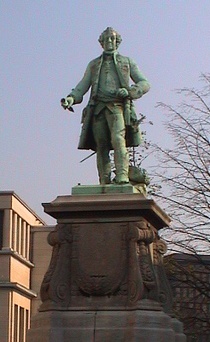 Bronze. Inaugurated in 26 November 1848 to replace a statue of Charles (in Roman dress) which had stood in Place Royale until 1796 when it was removed by the French to be melted down for coins. Charles himself, as Governor of the Austrian Netherlands, had commissioned this first statue in 1769, as to celebrate 25 years of rule.

This section lists the subjects commemorated on the memorial on this page:
Charles of Lorraine at place du Musée

This section lists the subjects who helped to create/erect the memorial on this page:
Charles of Lorraine at place du Musée

Inaugurated in 1872, this is a close copy (authorised by the sculptor) of the...

The sculptor has carved his name and the date of 1910 on the statue. The two...

Inaugurated 12 December 1847. Despite M Goffart’s skills a few letters have ...