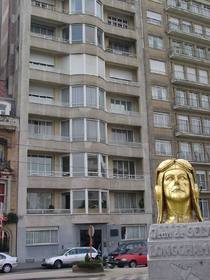 Credit for this entry to:
Frans L. Desmidt

Chosen as the last featured memorial in July 2002. It's a splendid, rather batty head and the story is an amazing adventure of derring-do. The building he attacked has its own plaque which can be seen by going to the map (button at the left) and clicking on number 17.

Following some publicity for BrusselsRemembers which featured this memorial we received the following email from Frans Desmidt who was living in Brussels during the war {editor's comments in these brackets}:
"According to what was to be heard in Brussels in late January 43. The pilot - no one knew at the time that it was de Selys Longchamps, who was flying the fighter plane. In September 42 he was affected {attached} to 609th. unit of the 11th "groupe de chasse". Any way he flew almost in between the houses of the avenue "Legrand, I guess" {either ave E Demot or rue de l'Aurore) facing the Gestapo Headquarters and he fired with his machine guns into the glass facade of the Gestapo building. Still according to the mouth to ear messages only three shells went in the next building, all the others did hit their target. But before heading for the Gestapo headquarters, he had also dropped a Belgian flag that landed somewhere in the Parc du Cinquantenaire.

In the night of the 15th to 16th of August {1943} Jean de Selys Longchamps flies a mission above Belgium. When returning from this mission his TYPHOON hit by the German anti aircraft guns, upon making his approach for landing, the plane goes apart. Jean de Selys Longchamps was just 31 years of age. (He had to cheat about his "old" age to become a fighter pilot.)

Needles to say that the days after the attack everyone in Brussels had a stroll on the avenue Louise and gazed with amusement to the badly hit Gestapo quarters. Happens that the Dad of one of my Dad's friends admired the Germans for their qualities, organization and resourcefulness and so on. But the man, only 50 years of age was a good Belgian more than anything and went for his patriotic walk as every one did in Brussels. Passing the quarters another person asked the man what he thought about the done job. The poor old man just answered: "a magnificent great job" and . . . . . . he was taken by the Gestapo agent to admire the quarters from the inside and also to visit the basement. Everyone knew that the basement was the place NOT to be. The man was beaten up, not too badly but still had a hard time to sit for a while and he did wear dark glasses even that it was only January. The poor man lost all admiration for the resourcefulness of the enemy."

This section lists the subjects commemorated on the memorial on this page:
Baron Jean de Sélys-Longchamps

A flying officer fighting in the British Royal Air Force. On 19 January 1943...

This section lists the subjects who helped to create/erect the memorial on this page:
Baron Jean de Sélys-Longchamps

It's a sort of rule of necessity that the photographs on this site show the m...

Albert I in ave du Parc

This bust, inaugurated in 1991, backs the building which is the headquarters ...

You can see that between our two photographic visits not only have the season...